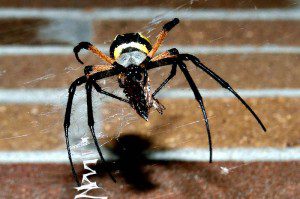 There are many different types of garden spider, most of the time these spiders are found in the lawn or garden but can also be found within the home as well. Garden spiders include the following:  meshweb spiders, crab spiders, running crab spiders, wolf spiders, nursery web spiders, comb-footed spiders, stretch spiders, orb-web spiders, sheet web spiders, dwarf spiders, sac spiders, and buzzing spiders. Most all of garden spiders are orb weaving, which basically means that they are known for their orb looking webs. The Garden Spiders is not aggressive and they are not poisonous to humans. Because they are not aggressive spiders, it is rare that one would actually bite a human. In some circumstances if they feel threatened or if they are pressed up against human skin, in that rare occasion they might bite a human. Even though garden spiders are not poisonous it is still important to seek medical attention, just in case the species of the spider is not identifiable.