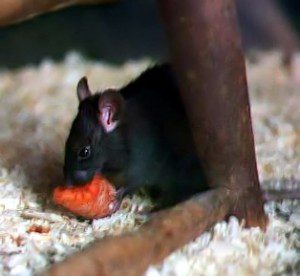 The roof rat (Rattus Rattus) is one of two introduced rats found in the contiguous 48 states. The other being the Norway Rat. This rat has a long record as a carrier of plague. Roof rats range along the lower half of the East Coast and throughout the Gulf States and upward into Arkansas. The roof rat is apparently not quite as adaptable as the Norway rat, which is one of the reasons it has not spread throughout the country. Its geographic distribution suggests it is more suited to tropical and semi-tropical climates.

Some isolated populations are reported from areas not within their normal distribution range; however, these instances are rare. Like the Norway rat, they are omnivorous and will feed on most anything if necessary. Roof rats usually require water daily, though their local diet may provide an adequate amount if high in water content. Both of the rats mentioned above are capable of entering through an opening of as little as 1/2 inch. This is possible by the ability to dislocate their joints and squeeze their body through small openings. This ability once again makes it possible for them to enter our structures rather easily while foraging for food and water.