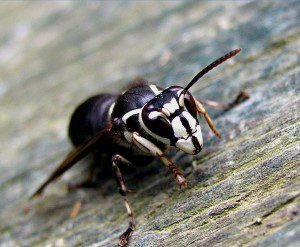 Hornets and yellow jackets prey on many insects that are considered to be pests, so they are actually beneficial. They do also prey on bees, but unlike honey bees, hornet and yellow jacket colonies die out every winter. Yellow jackets are generally smaller than hornets and are bright yellow and black, whereas hornets may be darker in color.

Pest control professionals should be consulted before attempting to treat any Hornet or Yellow Jacket infestation as they are both typically aggressive and some individuals may be allergic to their sting. Although these two insects do have a lot in common as far as their aggressive nature, they do vary greatly in their nesting habits and appearance. Yellow jackets are often mistaken for honey bee’s due to the similar body types. The major difference in their appearance is the honey bee is a dark orange in color and appears to have hair on the body. The yellow jacket on the other hand is bright yellow in appearance and appears to be hairless on the nodes, giving it a sleek and shiny appearance.  Hornets can vary in appearance as far as design go’s. These flying insects are typically rather large in size and do pack a powerful punch. They are very quick and very aggressive when disturbed. 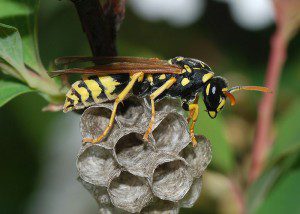 Hornet nest’s are typically fairly reclusive in nature. They like to build paper combs that are enclosed and the actual nest is not visible from outside. Their nest are sometimes mistaken for a bee’s nest. They are usually built high up in tree’s and they will generally avoid contact with humans. The hornet will also nest in decaying stumps in the ground or rotting trees. Yellow jackets are somewhat the opposite. These opportunistic nesting insects will invade wall voids, naturally made holes in the ground, holes in the sides of trees, and any other area that will provide a suitable nesting site for them. This is what brings them into close contact with humans.  Both of these insects will attack if disturbed. They are lightning fast and attack in great numbers which can cause severe injuries of possibly death. Great caution should be taken when coming into contact with the nest’s of these insects and they should not be disturbed. Contact us if you think you may have a problem with either one of these insects for a free visit from one of our certified professional’s to determine the best   what to deal with these insects.