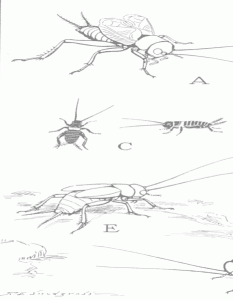 Adult field crickets about 1/2 to 1 – inch long and can be several colors including brown or black. They are active at night and are attracted to lights. Their diet is considered Omnivorous which means they eat almost anything available. These crickets prefer to live outdoors but if weather is unfavorable for them they will move indoors through broken foundations, cracked windows, ill fitting pipes, etc.

Crickets, or “True Crickets” are related to grasshoppers but more closely related to bush crickets because they have slightly flattened bodies and long antennae. Male crickets are the only ones that chirp. They have ridges on their wings that they rub together that act like a comb and file to form an instrument. Their left fore wing contains 50-300 teeth that are raised and angled. This wing is rubbed against the upper hind edge of the right fore wing, or scraper. There are two types of songs that the male cricket produces. The calling song attracts females and repels other males and is very loud. The courting song is used when the female is near and is a very quiet song. Once courted, the mating process begins and the female lays her eggs usually during the late summer to early fall.

There are 900 different species of the cricket. They are nocturnal insects and again many times confused with grasshoppers. They feed on organic material like decaying plants, fungi and seedling plants.