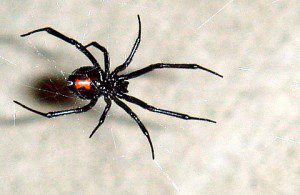 Of all spiders, the Black Widow is the most feared. The female’s venom is especially poisonous to people. Despite its reputation, this spider often attempts to escape rather than bite, unless it is guarding an egg mass or if it is cornered and pressed. The male black widow will not bite you. After mating, the female sometimes eats the male (remember, she only has to mate once in her life), earning the name “widow.”  The bite of this spider is a nerve and respiratory toxin. The bite of the female black widow spider may not always be felt at first and besides slight local swelling, there is usually little evidence of a lesion. Two tiny red spots can sometimes be observed in the center of the swollen area. Most of the time, pain at the site of the bite occurs immediately and becomes most intense after about three hours. An overall aching of the body, especially the legs, are common reactions. Headache, elevated blood pressure, nausea and profuse perspiration may occur in severe cases  In a lot of cases the victim of the bite reports having breathing problems.

One single bite should not be deadly to a healthy adult but may be to small children and the elderly. Regardless, immediate medical attention needs to seeked if a bite occurs regardless of age and condition. The condition is self-limiting and in most cases symptoms disappear in two or three days. Be very careful when working around areas where black widow spiders may be established. Take proper precautions, wear gloves and pay attention to where you are working. Black widow bites are sharp and painful, and the victim should go to the doctor immediately for treatment.