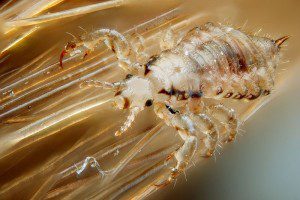 Lice: There are over 3,000 known species of lice, with only certain species relying on human hosts. Lice that feed on the human body may also be found in the folds and seams of clothing. The two most common in homes are the Head lice and the Body Lice. Head Lice are the most common of human infestations, and do not indicate a lack of cleanliness. Lice can be present in short or long hair, though they do require some hair. Human head lice are often found behind the ears or near the hairline, at the base of the neck. Their eggs, known as nits, thus the term “nit-picking,” are attached to a host’s hair with specialized saliva. Nits are white in color and are located near the scalp on individual strands of hair.

Body lice resemble head lice, though they make their homes usually in clothing rather than on the scalp. Body lice infestations are noticed by severe itchiness and red marks on the body and can result in skin infection.  Body lice have also been known to transmit diseases.