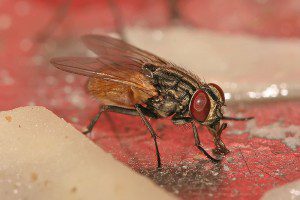 The common House fly is medium sized (1/6 to 1/4 inch long,) generally gray in color with  the female usually large than the male. The thorax bears four narrow black stripes. The House Fly also is categorized under Filth Flies because of the filthy habits of each fly. They are also easy vectors of diseases such as hookworm, whipworm, tapeworm, pinworm, roundworm, cholera, bacillary dysentery, infantile diarrhea, typhoid and paratyphoid are disease-causing organisms with which these flies are associated. Filth flies pick up pathogenic organisms from sewage, garbage, manure, decaying bodies and other such sources. These flying pests initially pick up dangerous organisms with their mouth and other body parts. The organisms are then passed on to humans and animals through the feces and vomitus of the fly.