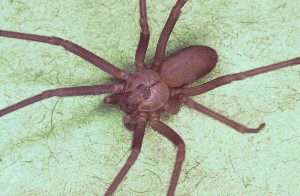 The Brown Recluse spider belongs to a group of spiders commonly known as violin spiders or fiddle backs. This is due to the characteristic fiddle-shaped pattern they have on their head region. The spider is golden brown with the fiddle being dark brown or black. This spider is not hairy and the fiddle pattern is often shiny. They are about 1/4 to 3/4 inch long. These spiders spin small, irregular webs under bark, stones or other secluded areas.

They are known for their poisonous venom. When bitten you may become ill and find that the wound does not heal quickly. The severity of the bite may vary. The symptoms may vary from none to a reaction that is quite severe. Usually, the brown recluse spider bite is not felt and the pain sets in from six to eight hours later. A typical bite area may resemble a pimple  or blister formation within six to 12 hours later. Mild to severe pain accompanied by swelling may occur during this time. The surrounding tissue begins to darken, is irregular in shape with sharply raised edges resulting in a sunken area which may be several centimeters in diameter. Often there is a systemic reaction within 24-36 hours characterized by restlessness, fever, chills, nausea, weakness, and joint pain. Where the bite occurs there is often tissue death and skin is sloughed off. In some severe cases, a wound may develop that lasts several months. In all cases, a physician should be notified. If at all possible, kill and take the spider to the physician for positive identification.