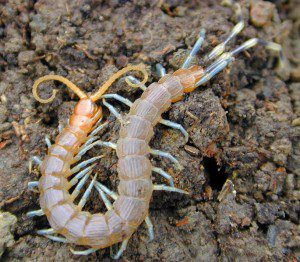 Centipedes are flattened, elongated animals with one pair of legs on most of their body sections. This easily distinguishes them from millipedes which have two pair of legs per body section. The total number of legs varies from 10 to more than 100, depending on the species.

Centipedes many times will crawl into homes and conceal themselves in various articles, such as shoes, diaper pails, laundry baskets, boxes and damp towels left on bathroom floors. It is not unusual for someone to tell us that they discovered the presence of centipedes while turning over in bed, only to be bitten by the wandering pest! Although they are not considered aggressive towards humans, centipedes do not like to be cornered or touched and will respond defensively in such situations.

Because of their poison glands and ability to bite, centipedes do pose an occasional threat to man. The bite of a centipede, even the largest species found in the United States, is not sufficiently toxic to be lethal to man, or even small children. The poison in a centipede’s bite usually produces only a moderate reaction similar to that of a bee sting, but if you are bitten and have a significant reaction, do not hesitate to call your physician.

As a household pest, millipedes are more of an annoyance or nuisance, rather than an indoor-breeding pest that causes destruction. Millipedes normally are found outdoors where they feed on damp and decaying wood, organic material, and will also feed on tender roots and green leaves that have fallen to the ground.