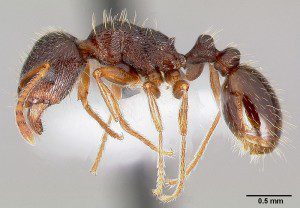 The pavement ant earns its name well, building nests beneath and along the sides of pavement: patios, driveways, sidewalks, foundations of homes. These pests can also be found inside of homes (and other structures) in wall voids, beneath toilets and water heaters. They also will readily nest in and beneath insulation in walls and attics. This ant removes dirt from the nest and places it on pavement to warm the dirt before placing it back on the eggs at night. Although seeing dirt on the pavement close to an ant mound does not automatically mean you are dealing with pavement ants. Outdoors, you will see pavement ants nesting beneath mulch, landscaping, stones and logs, and also along curbs. Pavement Ants are small pests (ranging from 1/10 to 1/16 inches in length) that can be found in many parts of the United States, as far north as Canada and as far south as Florida. These pests also thrive in parts of California, Mid-West and Southeastern United States. Each individual colony contains thousands of workers, multiple queens and is usually located at one particular site.  This is a two-node ant (has two segments or nodes on its pedicel) and is dark brown in color. Its antennae has 12 segments (which ends in a 3 segmented club) and its thorax has one set of spines. The first physical characteristic noticed (when viewed under a microscope or 30x lens) is the lines which seem to have been sculptured on the ant’s head.