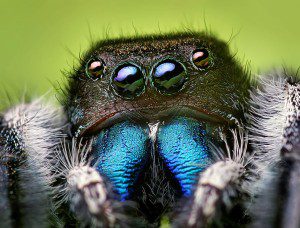 The jumping spider is from the family Salticidae. The name jumping spider really refers to most any group of hunting spiders that have the ability to jump or leap anywhere from 10 all the way to 40 times their own body length. There are around 4,000 described species for the jumping spider alone making it the largest of all other spider species. More than 300 of those species are found in the United States. The jumping spider is often mistaken for being dangerous, but in reality they are not. The jumping spider is not poisonous to humans. Like a wolf spider, the jumping spider typically does not attack humans unless they feel threatened or in danger. The only way a jumping spider bite may be hazardous is if the person bitten is allergic to spider venom, and because of that it is extremely important to consult medical attention when bitten by a spider, especially if the spider is unidentified.