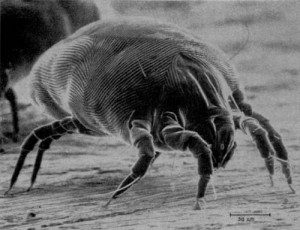 Mites, along with ticks, belong to the subclass Arcania (also known as Acari) and the class Arachnida.  Mites are among the most diverse and successful of all the invertebrate groups. Because of their small size (most are microscopic) they go largely unnoticed. Many live freely in the soil or water, but there are also a large number of species that live as parasites on plants, animals, and some that feed on mold.

There are over 45,000 described species of mites. Scientists believe that we have only found 5% of the total diversity of mites. Mites are believed to have existed for around 400 million years., The majority of  mites measure less than one millimeter in length. Although most mites are not harmful to animals, some species are parasitic in nature. Parasitic mites that attack animal hosts can cause severe skin irritation known as mange. Some parasitic species are more dangerous than others, as they reside within the respiratory tracts of their hosts. Others, such as chiggers, can transfer dangerous diseases.

Ticks are by far the most harmful of mites, to animals and humans alike. They transmit a variety of diseases, such as Lyme disease and encephalitis. They are also capable of transmitting more than one disease at a time. Perhaps the best-known mite, though, is the house dust mite (family Pyroglyphidae). They are a common cause of asthma and allergic symptoms worldwide. Another known  species and known as an indoor pest are the Clover mites. Their populations grow rapidly, as females lay up to 70 eggs, each of which matures within 30 days. As there are many species and Identification can be a problem our trained technicians are always on hand to help in properly identifying and eliminating all forms of mites.

The image is that of a common house dust mite.